GRATEFUL FOR THE GIFT OF THE NATURAL WORLD 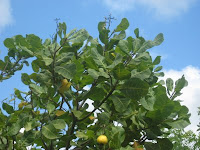 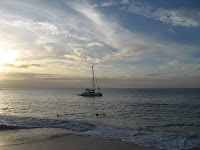 I am returning from a lovely Caribbean island, one that its inhabitants refer to as a paradise As a matter of fact, one of the religious groups on this island, the Rastafarians, consider the island to be the Garden of Eden.
Putting national pride aside, I have to agree that there indeed was a quality of paradise that embraced us while we were there.
We encountered not monuments of man- ruins of ancient temples, art museums, skyscrapers, opera houses or towers touching the sky. The island could only boast of a few new structures barely six or seven stories high, the ruins of an eighteenth century fort, several beautiful resorts and a few bourgeoning shopping malls. What overwhelmed us were the monuments of nature-an island carved out of the tumultuous eruptions of volcanoes, mountains lush with greenery, their tips climbing into the clouds, bay after bay beckoning the open sea to seek refuge from its vastness and find shelter in the arch of its coves and shores. From atop elevated forests, blue-green waters shimmered in the island sun, cliffs and bluffs dotted with a blinding array of colors, houses hanging along the sloping ranges of trees that encircle the land with an abundance of flowers and fruits.
Not stone, concrete or brick but banana plants as far as the eye could see, fruit bearing trees-oranges, mangoes, papaya, guava, apples, coconut, bread fruit: vegetation redolent with spices-cinnamon, mint, basil and nutmeg. And the flowers, like jewels on the diadem of its landscape –yellows and reds, purples and whites, pinks and lavenders.
This cornucopia of nature’s gifts –freely given, contains the treasures not only of nutrition, succulence and beauty, but is also the sources of medicinal miracles.
The explanation of the multi-dimensional uses of each and every component of the flora and fauna of this paradise fascinated me and filled me with a grateful awareness of how rich and generous our world is to us. Observing the banana plant for example, how it ripens each nine months, after which the trunk is cut allowing baby shoots to grow to their full height again, an unending cycle of earth’s uninterrupted gifts to those who dwell in her embrace.
On this island, twenty seven miles in length and fourteen miles wide, it seemed as if there was sufficient produce to feed many more multitudes than the one hundred and sixty inhabitants dwelling in its tiny fishing villages, its small cities and scattering of miniscule rural communities.
Not only the land but also the Atlantic on its east shore and the Caribbean on the west pour forth their bounty of sea life to the island and beyond. While snorkeling I was given the gift of underwater beauty, radiant fish of royal blue wriggling gracefully along colorful coral reefs.
The island resonated with its special sounds, the songs of its birds, the warm night air saturated with the humming of those who flit from branch to branch in an endless dance of life’s melodic miracle.

Is St. Lucia the Garden of Eden? Symbolically, perhaps. In my mind however, this island reminds me that paradise is not parochial but rather a reality that embraces the totality of the natural world. Our visit to this particular island was a pilgrimage to one shrine of nature’s magnificence, and inspired us to recite the Psalmist’s words: “ How wondrous are your works.”
Posted by Unknown at 10:14 AM