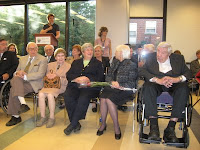 The Torah insists that first fruits-Bikurim- be brought to the Temple as an expression of gratefulness for blessings of a rich harvest. The act of bringing this gift was accompanied by a ceremony in the sanctuary, which included a declaration of the farmer’s personal link to the history of his people.
Bikurim can suggest not only the first but also the best of what one has.

Several days ago, I, together with almost two hundred people, were witness to a ” first fruits,” a bikurim, ceremony not in a Temple but in a setting of hope and rehabilitation for seniors in Montreal, Canada. The gifts brought before God were the extraordinary lives of ordinary people.
After two and a half challenging years of extraordinary effort, my sister-in –law launched a book containing the “first fruits” of twenty individuals –“senior artists, a sculptor, writers, community leaders, a rabbi, a superior court chief justice, an 85 year old university graduate and the recipient of the Governor General’s Caring Canadian Award.”
Sensitive to others as sources of strength and inspiration, especially the elderly, my sister-in-law’s journey to the “first fruits” ceremony began with an idea. Why not record the achievements of ordinary people who do extraordinary things? Why not recognize people’s lives publicly so that they may encourage and inspire others? Why not return the gifts of life to these generous souls and in so doing remind them that their lives truly matter?
With an ingenious title in mind for the book-Honorable Menschen-she sprang into action mobilizing many at the Senior Citizen center to interview, support and fund this project. As editor –in chief, she made wonderful use of her many skills as a writer and as women of genuine sincerity, she gained the participation of many.

The event arrived. Presentations and declarations of connection and affection were made.
Amidst these words and audience applause, the twenty “honorable menschen”-from the age of 65 to 104- sat with eyes radiating the light of inner validation and self-worth. They were given perhaps the most precious gift of all-the awareness that their lives had meaning and purpose, that their struggles and triumphs really mattered. Two of the recipients could not speak; paralyzed, they were confined to a wheel chair. In fact, with all the declarations of praise, pride and honor, we all remained speechless, overwhelmed by the spiritual beauty of the moment.
At the conclusion of these activities, my sister-in –law thanked me for coming to Montreal and sharing in her joy.
Doreen, thank you.
Posted by Unknown at 4:05 PM

The Most Successful Sites for Crypto, Casino & Poker - Goyang
Goyang jancasino.com Casino & Poker is one of the most famous and well known crypto gambling novcasino sites, founded sporting100 in goyangfc.com 2012. https://septcasino.com/review/merit-casino/ They are popular because of their great