GRATEFUL FOR MY PEOPLE 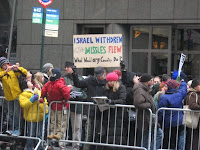 I attended a rally in solidarity with Israel in New York today. As a rule, I avoid large crowds of this kind feeling that the presence of one body squeezed in among thousands of others serves no useful purpose.
It was bitter cold and I could not stand in the crowd for much longer than an hour.As I walked away from the sea of red hats it became clear to me why I had joined the others.In small part it was to support the solidarity of American Jews with Israel. Largely, however, I felt overwhelmingly alone surrounded by a sea of searing sounds that tore away at my soul. Erstwhile voices of reason and fairness metamorphised into a miasma of malice. Strident cries of-"Genocide, Holocaust, indiscriminate extermination of Palestinians, killing of children by Zionists" filled the streets of Europe's capitals; Koranic verses describing Jews as pigs and monkeys were orated with shrill hatred in places of Moslem holiness by Moslem holy men.
Bill Moyers, a personal "idol" of intelligence and fair, balanced social and political commentary angrily quoted Deuteronomy's injunction to destroy idolatry as a rationale for the alleged deliberate brutality of the Israeli Defense Forces in Gaza. What does Deuteronomy have to do with doing battle in heavily populated areas where Hamas exploits the innocence of civilians using them as human shields and callously converting mosques, schools, hospital and homes into places of launching pads from which rockets are hurled indiscriminately against the civilian populations of Israel? Where was Moyer's liberal understanding of Deuteronomy as an historical document whose literal meanings were always interpreted poetically, prophetically and figuratively by Jewish commentators throughout the generations? Rabbinic Judaism, the Judaism of the past two thousand years, expanded and enlarged its understanding of the Torah text to exclude the remotest possibility of violent behavior against any non-Jew anywhere. It is sad that Liberal Baptist Moyers has regressed to a fundamental Baptism out of a sense of misplaced anger, perhaps guilt. Mr. Moyers: Have you forgotten that Deuteronomy contains the Ten Commandments? What about Deuteronomy 10:19-"You too must befriend,love the stranger.."
What does religion have to do with the political and military situation that leave's Israel little if any choice when its enemy Hamas is intractably determined to wipe Israel of the map? Perhaps it is apt to interject religion after all. I believe that Judaism has made it possible for Israel to respond with the kind of sensitivity and morality that it has exercised in spite of the greater danger to its soldiers and civilians.
As I stood in the cold, I did not hear a single word of insult or disparagement of any Arab, Palestinian or Muslim. By contrast, on my way home, as I overheard the protests of Palestinian supporters,Israel, Zionism and Judaism were well within the bounds of scurrilous and vile expressions of ethnic and religious debasement and slander. There is not a single Jew whose heart doesn't ache for the injury, pain and death of Palestinian innocent men , women and especially children. Yesterday, I attended Sabbath services which concluded with a prayer written by an Israeli rabbi on behalf of all the children of Gaza.I would be hard pressed to hear such a prayer in a mosque for the well-being of Jewish children traumatized daily by the whistle of rockets flying over their homes, kindergartens and air -raid shelters.
Today I needed my Jewish home. Throngs of Jews shivering in the cold warmed my heart and mind reassuring me that while Israel is not perfect-mistakes are made, but not intentionally; killing innocents is not the policy of Israel; Israel is not responding "disproportionately,"whatever that means.It defies logic to suggest that any war against an enemy can be won if the enemy suffers less than the defender! Tragically, Israel is simply trying to ensure the protection and safety of her citizens.
This is what home and family mean. When there is no place to go,when no one will let you in, there is one place that will always open its doors and embrace you-that place is home, the family, the Jewish heart and soul-Israel. For this I am grateful.
Posted by Unknown at 11:25 AM