GRATEFULNESS FOR THE SALUTE TO ISRAEL DAY PARADE 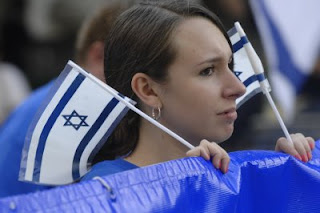 Over one hundred thousand Jews lined Park Avenue or marched along the middle of the street from fifty –ninth to seventy-ninth streets in New York City. It was a sun-drenched Sunday afternoon, the clear blue of the sky above finding its counterpart in the broad blue stripes of over a hundred thousand Israeli flags being waved proudly and enthusiastically by young and old alike. The sidewalks were virtually impassable, the greatest obstacle being baby carriages by the hundreds.
It was the annual New York extravaganza of Israel’s statehood but perhaps more importantly of Jewish prominence and presence in the greater New York area. Floats, magnificent marching bands of Afro American marchers and dancers, and multitudes of school children, one yeshiva, day school or congregational school grouping after another, a seemingly endless train of colorful T-shirts. Jewish music floating along the heavily tree-lined avenue guarded by the most expensive real estate in America, a picnic, a happening, a time of Jewish pride.
Some are critical of this event; it is too showy; too expensive, it simply provides a fun Sunday for Jews to gather and socialize and feel good about themselves.
As I observed one group after another passing by, letting loose with outbursts of self-congratulations and yet appearing awkward in the presence of so many people, I was engulfed by a myriad of contradictory feelings about the parade. It suddenly occurred to me, almost in the flash of an insightful memory, why I was grateful for this pageant.
The day before, in the small chapel of the synagogue, Shabbat afternoon services were being conducted. It is the custom at the time of the waning hours of Shabbes for memorial prayers to be recited on behalf of the deceased whose anniversary of death is commemorated during the following week.
A couple stood by the reader’s desk. The lay ritual director recited the prayer requesting the name of the deceased at a particular point in the prayer. One prayer was recited; then another. I thought to myself: How odd? Both parents died on the same week.
Another “El Moleh-“ “God of Compassion," the opening words of the prayer of memory. And another. The prayer was repeated almost ten times for the couple standing there. It then became clear. I approached them at the conclusion of the prayers, asking in a supportive and empathic manner-“Your family-victims of the Holocaust?”
“Auschwitz,” came the somber reply.
It was this almost routine-like ritual of an ordinary Sabbath afternoon that made me understand with painful poignancy, the meaning of the Salute to Israel Day Parade.
Especially the baby carriages and the myriads of school children. Israel the land, Israel the people lives. And I am grateful.
Posted by Unknown at 1:19 PM